Dragoslavele is a village located at the foothill of Leaota Mountains (Southern Carpathians), on the passage from the southern part of Romania to Transylvania. Mentioned in documents as early as fifteenth century, the village was the border where the brașoveni, the traders inhabitants of Brașov (Kronstadt) had to pay custom for entering a different economic market, and political entity; the opposite applied as well, namely, the same traders who acquired goods from the southern areas (later under complete Ottoman influence) had to pay tax for exporting them to Transylvania. The name, a Slavic one, most probably comes from Dragoslav (drag, dear, beloved, and slava, fame, so beloved fame) an early medieval military leader of the first local political nuclei in this southern region.

In Dragoslavele, now, there is no physical trace of the once rich trade path and border, and this should not come as a surprise given that even the city of Brașov itself does not have a museum of local trade or anything alike. The only impressive feature, apart from some sixteenth and seventeenth century stone crosses that stand witness of the symbiosis existing between religion and politics in the Byzantine realm, is the vernacular architecture. The geometric and floral patterns displayed so lavishly in finely worked wood balconies are conserved rather well in the early twentieth century buildings, as well as in the public mind. A proof in this sense is the fact that many new houses reiterate the turn of the century vernacular architecture.

As you exit the village in direction Brașov, on the left side, you cross the Dragoslavele creek and you find yourself in front of a gate behind which there is a monk settlement. This dates 1929 and the houses belonging to it were given as a gift by this region to the then patriarch (head of Romanian Eastern Christian Church)-Miron Cristea, a very popular and controversial personality of interwar Romania. You start going up the mountain and in about seven minutes of walk, you reach the church of this monk settlement. The church is a wonder by its picturesque location, and a baffling appearance. It is an old northwestern Romanian wood church that displays a different style. Indeed, it was built sometime in the seventeenth century in Borșa, a village located in the Maramureș region, hence it has Ukrainian, Polish, and, generally, Central European influences (see the bell tower, the door and its decorations, the ceiling paintings inside). This makes it contrasting to the local architecture, mostly of Byzantine, Neo-Byzantine and post-Ottoman inspiration. The church has Saint George as patron and it was transported from Maramureș and installed in the monk settlement on a white stone bed in the late 1940s. It is ironic that in full Stalinism, the patriarch of the time (Justinian Marina, 1901-1977) gave a new identity of this place. The presence of a monument of the northwestern part of the country strongly emphasises the syncretism of Dragoslavele area, as gate towards a world that was directly subject to Western influences. 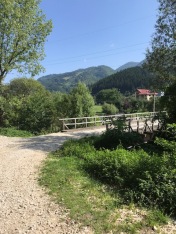 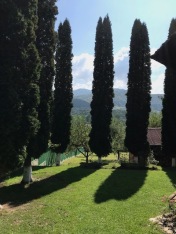 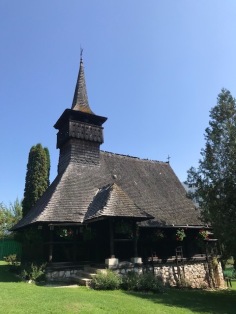 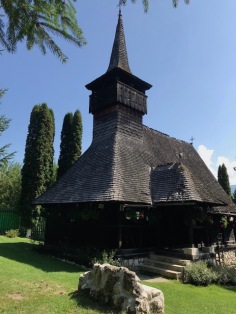 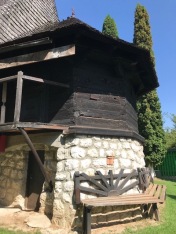 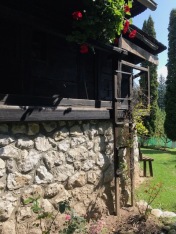 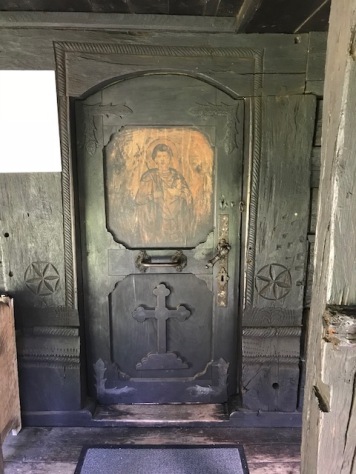 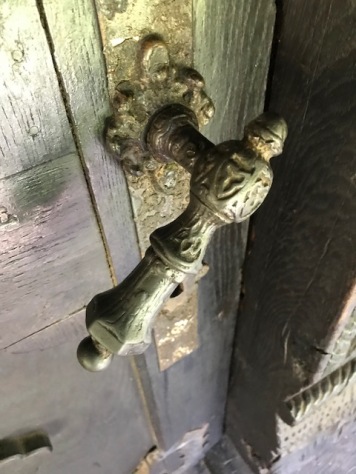 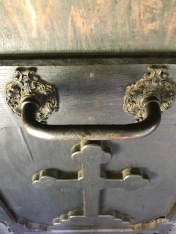 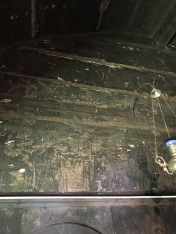 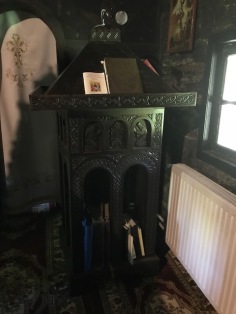