On President Clinton Avenue at No. 1200, in the heart of the vibrant River Market area of Little Rock, Arkansas, the visitor finds The William J. Clinton Presidential Center. The building has a transparent, modern, aerial structure, echoing the nearby bridge over the Arkansas River. The Center was planned by architects James Polshek and Richard Olcott, and the inside exhibition spaces designed by Ralph Appelbaum and Melanie Ide. It was opened to the public in November 2004.

The Clinton Presidential Center is conceived to blend educational and recreational activities. This complex that has a scenic position, on the bank of the Arkansas River, is equipped with the complete archives of the Clinton administration, but it also features a vast park and restored wetlands where the visitor can explore the wildlife and river life of the area. The red brick Choctaw station, a historic train station located near the main body of the complex provides an unexpected contrast to the predominant glass structure of the latter, giving to the entire establishment an innovative architectural twist: a connecting point of past, present, and future.

The Clinton Presidential Center hosts several institutions grouped under the common aim of keeping alive the legacy of William Jefferson Clinton, the 42nd president of the USA. This stays true to the philosophy that governed Clinton`s coming to the White House, namely the attempt to build a bridge that would connect the past with the 21st century.

The main building, which looks indeed like a bridge that expands itself towards the shore and into the distance, hosts the multimedia exhibition that covers the years of Clinton administration. It is constructed basically on the framework of a long two-floor gallery*. It resembles the Long Room at Trinity College, Dublin, a place visited by Clinton when he was a Rhodes Scholar.

The entrance is through a lobby that gives direct access to the basement, the place where the Forty-Two Restaurant is located (the allusion to Clinton`s presidency is more than obvious). In the lobby, the visitor can see the Cadillac one, the Fleetwood Cadillac limousine which was the presidential limousine in 1993, and it served as the daily vehicle of President Clinton. In the same area, there is also a secret service exhibition. Other highlights of the lobby include: the museum store, which contains representative objects of the displayed items in the permanent and temporary exhibitions, but also of the state itself, exotic objects, and young designers creations; an exhibition area that accommodates thought-provoking temporary exhibitions. Through April to October 2019, Clinton Center hosts `Washed Ashore: Art to save the Sea`, a collection of life-size sea creatures made of plastic trash found on beaches, aimed at protesting against the sea and waterways pollution.

The main gallery, technically located on the second floor, contains multimedia timelines and policy alcoves, filled with statistics, correspondence of the President (e.g. see the blue boxes*), daily presidential agendas, photos, etc.. There also is a replica of the cabinet room in Clinton`s time, filled with information concerning the cabinet members and the constitutional flow. Next, near the Orientation Theatre, where the visitor can watch a 12 minute film about the life and work of W.J.Clinton in the context of American realities of the second half of the 20th century, there is a section called A Campaign for the Future, in which the visitor gets acquainted with the memorabilia of the 1992 and 1996 campaigns. Last but not least, there is the so-called Great Hall, a space of meetings and official events that can accommodate a few hundreds of people.

The upper level of the main gallery, technically located on the third floor, contains the story of the couple that inhabited the White House, as well as a re-creation of the atmosphere of the White House when it was inhabited by the Clintons: the Christmas and Easter parties, the special dinners  and their exquisite table arrangements and menus. The Clinton Center owns 79.000 artifacts of Clinton`s Presidency including gifts received by both Bill and Hillary, dresses worn by Hillary on special occasions, the complete saxophone collection of Bill Clinton, and many other interesting items like the collection of Easter eggs representing key geographic and cultural symbols of America. On the upper gallery, there also is a 100% replica of the Oval Office of Clinton`s time, containing the very objects, at the very scale of the real Oval Office. Unfortunately, photos are not allowed to be taken inside.

The other core institution of the Clinton Center is the seat of the archives, a building connected to the main gallery/museum, but located more towards the southern part. It is the richest presidential archive, and the first to have electronic documents along with the physical ones. It contains approximately 80 million pages of documents, 21 million e-mail messages, and 2 million photographs.

The already mentioned Choctaw station also called Sturgis Hall by the name of the donors that backed financially its reconstruction, hosts Clinton Foundation and the University of Arkansas Clinton School of Public Service. The beautiful building with a nice terra cotta frieze around the second story is one of the finest railroad buildings of the American turn of the century in Arkansas. It was built in 1899, and it served as a passenger depot for the Choctaw, Oklahoma & Gulf Railroad Company until 1950. After being a depot, the house hosted throughout years a restaurant, a night club, and even a church!

This wonderful complex of buildings, particularly the light and luminous main gallery, whose huge windows show the vibrant downtown Little Rock and its skyline, represent an intimate part of Arkansas, of the USA, of the world. This geographical bridge is echoed by the historical bridge between past and present represented by the sapling of the white horse chestnut tree that stood outside the place where Anne Frank was hiding from the Nazis. This sapling is planted in the Clinton Center Park and it is one of the several saplings of the original chestnut tree, which now are growing in various parts of the world.

-Official Guide and leaflets of the Center

*The building itself has five floors. The last floor, somewhat detached from the building, is the private penthouse of Bill Clinton.

*The blue boxes contain records that represent 2-3% of the entire Clinton archival collection. There are 4536 boxes of correspondence from the White House Office of Agency Liaison. This office assists people who request help from the President or First Lady in resolving an issue. 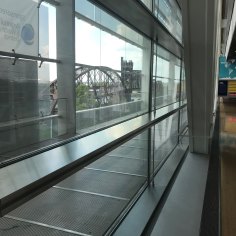 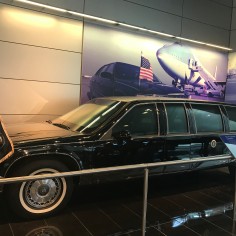 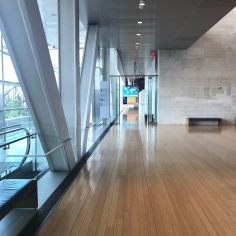 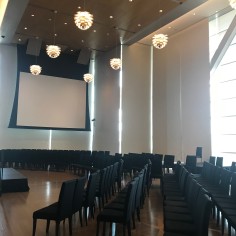 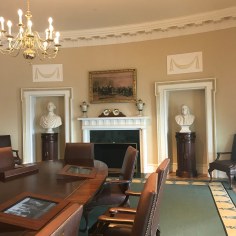 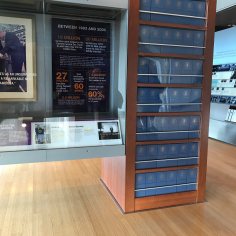 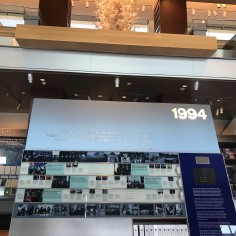 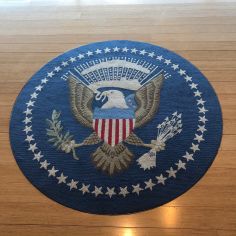 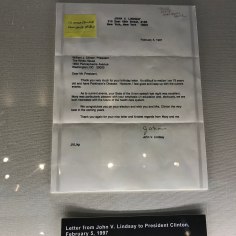 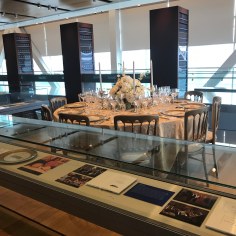